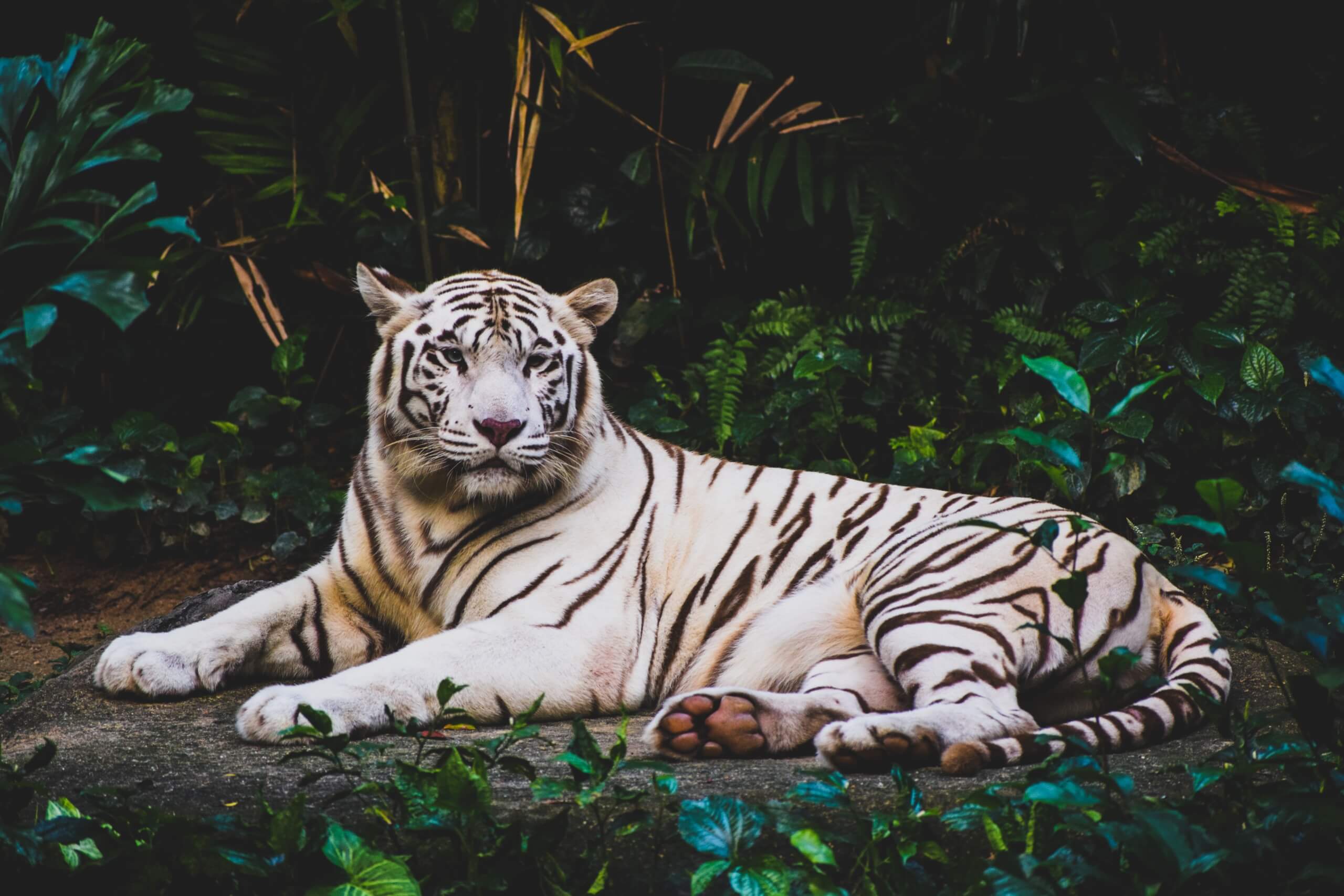 One topic I find particularly frustrating is the perpetuation of ‘white’ tigers in our culture.  Due to the captive tiger crisis, there is a lack of salient public awareness as to what a real tiger is.

There is one recognized species of tiger, Panthera tigris, divided further into six extant subspecies: the Bengal, Amur (Siberian), Indo Chinese, South China (extinct in the wild), Malayan and Sumatran. The Bali, Javan and Caspian subspecies are extinct. There is no such natural animal as a ‘white’ tiger- these tigers are genetic manipulations that have been disseminated to the public as a rare creature that is interesting, unique and beautiful. Contrary to popular belief, there are no wild populations of white tigers; all white tigers in captivity are significantly inbred. White tigers are a genetic anomaly, selectively and intentionally inbred for the expression of a rare recessive allele. ‘White’ tigers are such a rare pigment variant of the Bengal subspecies, there have only been 12 documented sightings in the wild in India in the past 500 years. In fact, all white tigers in the US are descendent from one of these rare anomalies; in 1951 a male white tiger named Mohan was captured in India-the last known wild white tiger to exist and the direct ancestor of all subsequent white tigers in captivity.

There are some glaring animal welfare issues here, as the same gene that causes expression of the white coat causes the optic nerve to be wired to the wrong side of the brain, thus all white tigers are cross eyed, even if their eyes look normal.  They also often suffer from high infant mortality (approximately 80%), club feet, a variety of mental impairments, cleft palates, spinal deformities and defective organs. Also worrying is how the white tiger myth, perpetuated by those who display or market these tigers, detracts attention and dialog away from actual conservation and channels money in the wrong direction. The idea and fascination of a white tiger is so pervasive that paraphernalia (stuffed animals, calendars, t-shirts, lunch boxes etc.) can be found everywhere: at malls, on the internet, in toy stores and, alarmingly-even in zoo gift stores. Entertainers like Siegfried and Roy, who advertised their ‘Royal White Tigers’, as if they were a unique and coveted species, perpetuated this problem by giving credence to the ‘rarity’ of these tigers. This type of commodification creates a false sense of what a wild tiger is and thus marginalizes conservation efforts.

The storyline given to the public is that captive tigers, including white tigers, augment conservation; thus, tigers continue to be framed by exhibitors and owners as beneficial for the conservation of wild tigers. Breeders and exhibitors use this ‘extinction risk’ discourse as an excuse to breed all tigers under the guise of conservation and the laws in place, with few exceptions, allow this practice to continue. This type of issue framing is such a powerful tool that it can become pure manipulation. The reality is that no tiger born in captivity has ever been introduced into the wild, and unfortunately this lie takes away attention from the real issue: there are less than 4000 tigers left in the world and habitat loss, habitat conversion and poaching are the biggest threats to their persistence as a species.  The white tiger myth is an example of how powerful an idea can be maintained in the public sphere, regardless of its validity.  White tigers have become so popular, commodified and persistent in our culture that their image is ubiquitous.  Many people believe it to be a separate subspecies altogether, engendering ideas that because it is rare, the white tiger is in even more danger of extinction than ‘orange’ tigers.

In 2008 the Association of Zoos and Aquariums (AZA), the regulating body of zoos and aquariums in the U.S., recognized the need to stop breeding white tigers; in 2011 they formalized this into an official policy and instructed AZA accredited zoos not to breed any more of them, therefore phasing these tigers out of AZA populations. This is a start but unfortunately AZA accredited zoos account for only 5% of the tiger population in the U.S.

How can you help? Stop the myth and spread the truth. Do not support any facility (road side and/or non-sanctioned zoo, cub petting operation, circus etc. that has white tigers, EXCEPT many legitimate rescue sanctuaries have white tigers that have been rescued from zoos, circuses or private owners. Legitimate sanctuaries are non-profit, have strict no breeding policies and no human/animals contact. Some of these include: